Assuming the order gets made and shipped in time (update 2017-06-22: it did), I’ll be arriving in Chicago for ALA Annual carrying a few tens of badge ribbons like this one:

Am I hoping that the librarians made of anti-matter will wear these ribbons to identify themselves, thereby avoiding unpleasant explosions and gamma ray bursts? Not really. Besides, there’s an obvious problem with this strategy, were anti-matter librarians a real constituency at conferences.

No, in a roundabout way, I’m mocking this behavior by Jeffrey Beall: 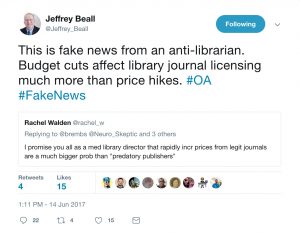 I suggest reading Rachel Walden’s tweets for more background, but suffice it to say that even if you were to discount Walden’s experience as a medical library director (which I do not), Beall’s response to her is extreme. (And for even more background, John Dupuis has an excellent compilation of links on recent discussions about Open Access and “predatory” journals.)

But I’d like to unpack Beall’s choice of the expression “anti-librarian”? What exactly makes for an anti-librarian?

We already have plenty of names for folks who oppose libraries and librarians. Book-burners. Censors. Austeritarians. The closed-minded. The tax-cutters-above-all-else. The drowners of governments in bathtubs. The fearful. We could have a whole taxonomy, in fact, were the catalogers to find a few spare moments.

“Anti-librarian” as an epithet doesn’t fit most of these folks. Instead, as applied to a librarian, it has some nasty connotations: a traitor. Somebody who wears the mantle of the profession but opposes its very existence. Alternatively: a faker. A purveyor of fake news. One who is unfit to participate in the professional discourse.

There may be some librarians who deserve to have that title — but it would take a lot more than being mistaken, or even woefully misguided to earn that.

So let me also protest Beall’s response to Walden explicitly:

It is not cool.

It is not acceptable.

What makes an anti-librarian? by Galen Charlton is licensed under a Creative Commons Attribution-ShareAlike 4.0 International License.

3 thoughts on “What makes an anti-librarian?”