What do ogres, hippogriffs, and authorized Koha service providers have in common?

Each of them is an imaginary creature.

Am I saying that Koha service providers are imaginary creatures? Not at all — at the moment, there are 54 paid support providers listed on the Koha project’s website.

But not a one of them is “authorized”.

I bring this up because a friend of mine in India (full disclosure: who himself offers Koha consulting services) ran across this flyer by Avior Technologies: 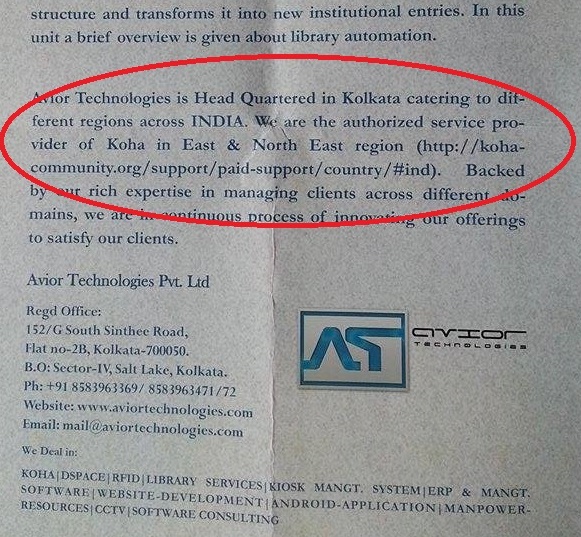 The bit that I’ve highlighted is puffery at best, misleading at worst. The Koha website’s directory of paid support providers is one thing, and one thing only: a directory. The Koha project does not endorse any vendors listed there — and neither the project nor the Horowhenua Library Trust in New Zealand (which holds various Koha trademarks) authorizes any firm to offer Koha services.

If you want your firm to get included in the directory, you need only do a few things:

What does this mean for folks interested in getting paid support services?  There is no shortcut to doing your due diligence — it is on you to evaluate whether a provider you might hire is competent and able to keep their customers reasonably happy. The directory on the Koha website exists as a convenience for folks starting a search for a provider, but beyond that: caveat emptor.

I know nothing about Avior Technologies. They may be good at what they do; they may be terrible — I make no representation either way.

But I do know this: while there are some open source projects where the notion of an “authorized” or “preferred” support provider may make some degree of sense, Koha isn’t such a project.

And that’s generally to the good of all: if you have Koha expertise or can gain it, you don’t need to ask anybody’s permission to start helping libraries run Koha — and get paid for it.  You can fill niches in the market that other Koha support providers cannot or do not fill.

You can in time become the best Koha vendor in your niche, however you choose to define it.

But authority? It will never be bestowed upon you. It is up to you to earn it by how well you support your customers, and by how much you contribute to the global Koha project.